When we took our kids to Disney this year, my wife and I were pretty shocked (yes, shocked) at the things that we saw grown-ups doing. So I made a mental list of 5 things adults should STOP doing at Disney!

Before I dive in, let me remind you what my wife says constantly “Different strokes for different folks”.  This means that while it drives ME crazy, if it makes you happy – go for it. 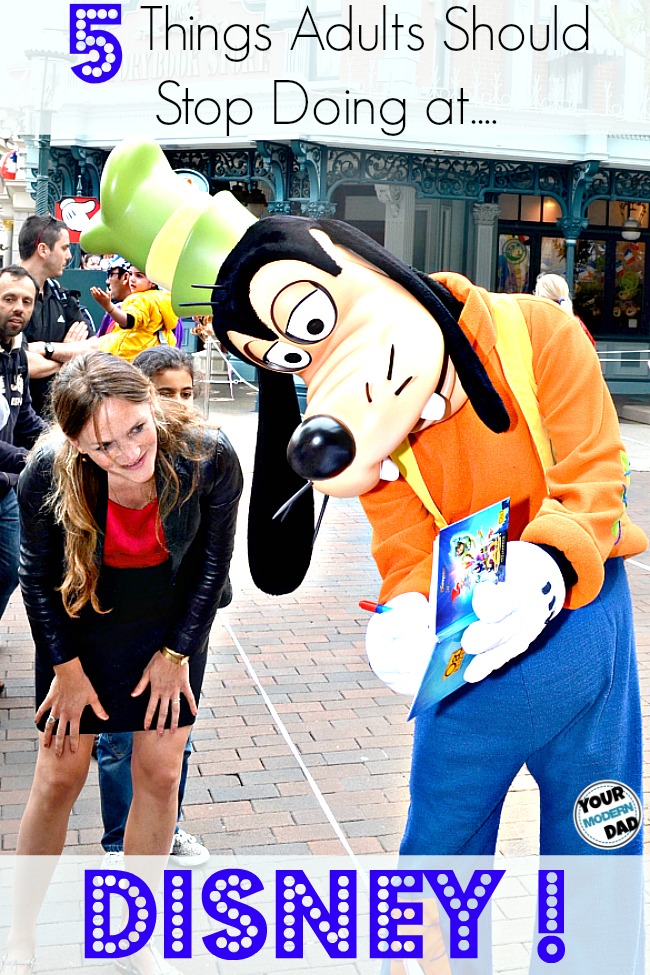 Thought you’d enjoy a little humor today…   these adult things are FUN, until you are the one standing behind them with a 2 year old. 🙂

1. Not letting a child go ahead of you when you are the last one in line to get a picture with a character.
TWICE while we were at Disney, the characters had to take a break right when it was our turn (The Characters that are in the line to greet the kids have to leave for an hour to get out of the heat and take a break).  Both times that it happened, we were next in line and had to get the comment from the staff member “Cinderella will be back in an hour.”
You should see the look our our two year old daughter’s face when  she heard that Cinderella (& Snow White) is literally an arm’s reach away, but can’t give her a hug just yet.   By the way- the grown up couple in front of you is hugging Cinderella at this exact moment.

2. Getting signatures from the characters.
THESE ARE REGULAR PEOPLE DRESSED UP.   Think of it as a glorified Halloween costume.    It is all in the fun of Disney, but this one just makes us laugh a little.

3.  Sitting on the curb for the parade, while a child has to stand behind you.  (Not just at Disney!!)
We were walking down Main Street to try and get a spot for one of the afternoon parades at Magic Kingdom.  There it was an open spot on the side walk.  As we guided our two year old daughter to go over and sit down, an older woman rudely stated:” Sorry that is for my daughter!” When her daughter came over after getting some ice cream, she was in her mid 50’s.  NO Kids with her…Nothing physically wrong with her!  I was always raised with the idea to let children take your place, especially young children.

4. Strollers.
Strollers are NOT weapons, people!
Let me tell you a story about this one: So we were in the process of catching one of the late-night Trams out of Magic Kingdom after the last fireworks show and we were trying to beat the crowds.  We left a little bit early from the show and waited in line at the Tram pick-up for 40 minutes.   We had Jack, 6 by one hand.   We had Beau, 5, asleep in my wife’s arms.  We had Ethan, 3, sound asleep in our single stroller.   It was our turn to board…
With the heavy crowds, we all squeezed into the small Tram car, to the point were I was straddling over Ethan’s stroller, with my heels to the edge of the door.  As the bell rang to close the doors, this  lady, pushing a stroller, came dashing to our Tram Car.

As she could clearly see: there was no room on the tram.  She began to yell at me that: “YOU need to move!” and began to jam her stroller into the back of my legs.   She then began to swear profusely at me and the 18 year old college kid working the Tram Platform.  (We make it a point not to swear in front of our kids, so we were already uncomfortable with it, but to then try to force your way onto the tram was taking it too far).   Did she realize that she didn’t fit?  No.   She proceeded to hit me with her stroller, until the security officers came to stop her.
Ps- I had a huge bruise on my leg that went from my knee to my ankle.

5. Selfie Sticks with iPads.
Ok- we get it.  I mean, we are bloggers.  However… use an iPhone.  These grownups with the iPads make us laugh because they are just so big.  It looks like they are carting around laptops.   I am all for it if it works better for you, but just a note to say that the quality on an iPhone is comparable or better to the iPad (and WAY smaller!).

UPDATE: By the way… selfie sticks are now banned from “The Happiest Place on Earth.”

Ps- if you are afraid your phone will die, grab this pocket charger.  We use it and love it (and then we don’t have to stop at every outlet to recharge our phone!)