“I participated in an Influencer Activation on behalf of Influence Central for Hasbro. I received product samples to facilitate my review as well as a promotional item to thank me for my participation.”

For the past few weeks, Becky and I have been trying toTeach the kids about NYC and some of the history behind it.  The reason that we have been doing this is that we are taking them to New York for the 1st time.  So we have been teaching them about the great and historic things like Broadway, Times Square, Grand Central Station, Central Park, and the Statue of Liberty.   While trying to teach the kids about New York, we actually made a mini sculpture of the Statue of Liberty with Play-Doh. 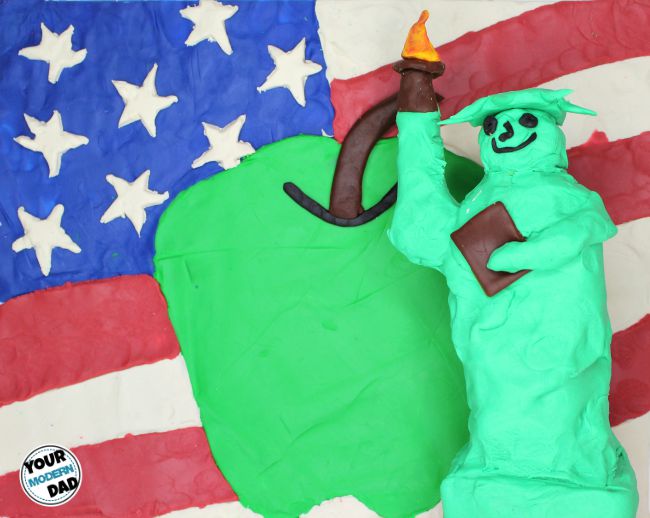 Back when I was a kid I can remember my parents taking my brother and I to New York City.  I was probably about 9 years old and I can still remember most of the day that we spent there.  The main attraction that we went to… the Statue of Liberty. I remember learning about the history of the Statue.  It was a gift from the people of France to the United States back in the late 1880’s.  Over the years, the Statue of Liberty has stood for “freedom” and “a new beginning” as it was a welcoming sign to the millions of immigrants were looking for a new start.  This is were my Great Grand Parents migrated after they left the former Czechoslovakia many years ago. 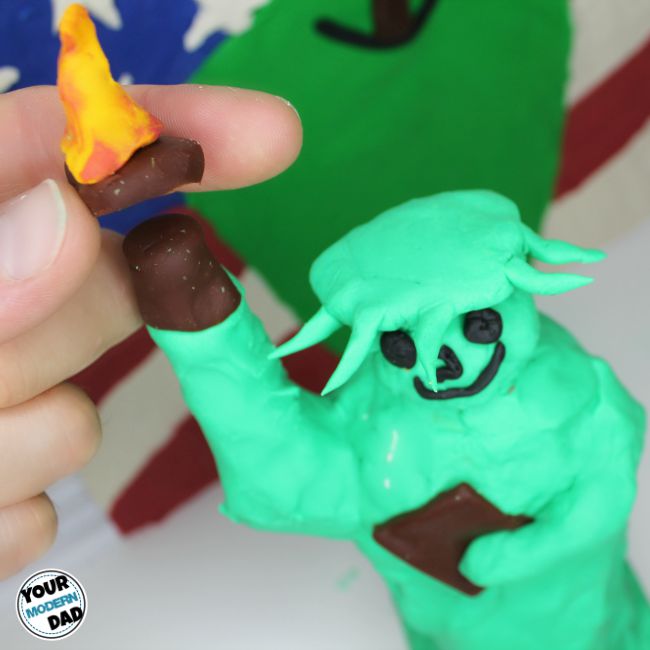 I remember walking around it and amazed on how big it was. Also learning that it is was not painted green.  It is actually made of copper and due to the oxidation over the years, the copper turned to iconic green color it is today.  I taught them about how she is holding the book that has the date that we gained our independence, July 4, 1776.
(here is the book that we made for her to hold) 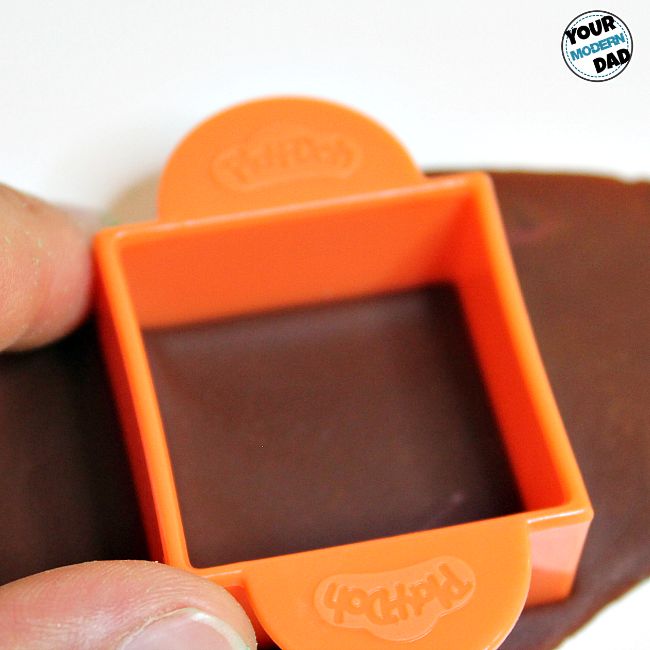 During our lesson, Jack was really studying up as she was intrigued like I was (I was his age when I went there) . 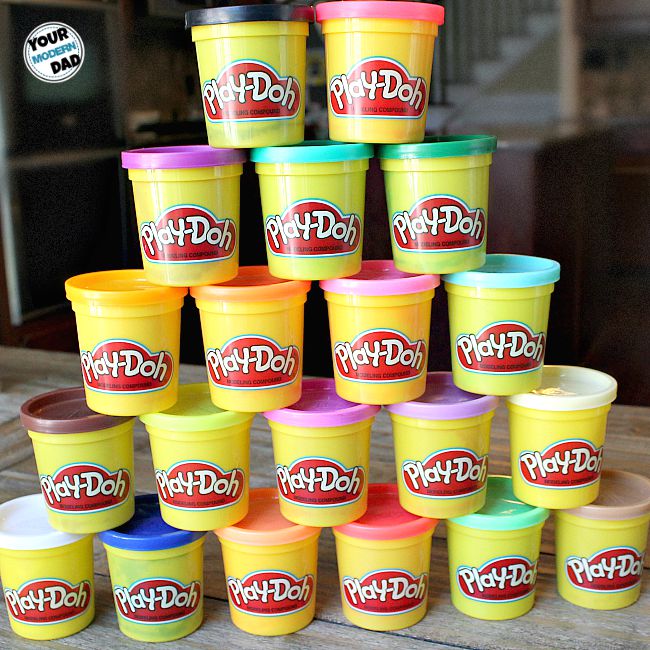 Since Hasbro makes Play-Doh in so many colors (see above), it was easy to use it for our lesson.  (We use play-Doh for everything from creating things like this statue to making pretend birthday cakes.)   We have it in our kitchen, so the kids can use it on a daily basis and it is a quick activity that can be as short or as long as we want it to be.  We keep it all in a box and we just throw all of the little tools in there with it… 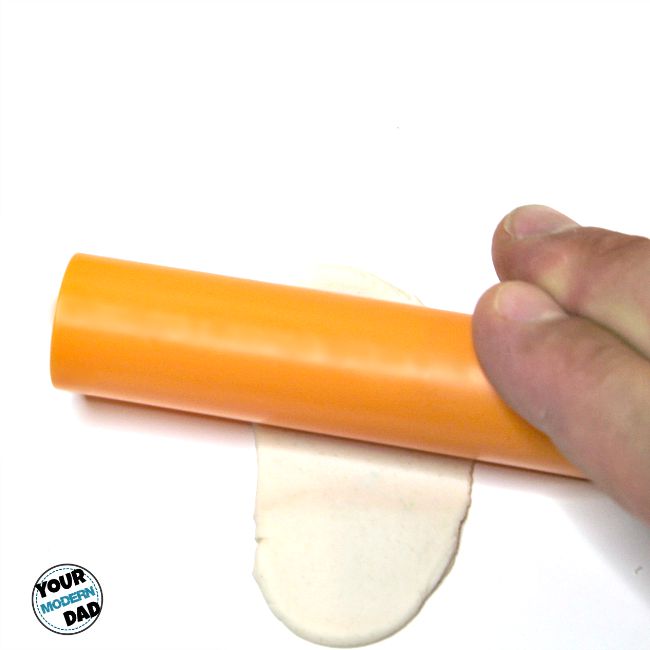 The kids love to play with the shapes and tools!  The sky is really the limit for what we can come up with when we are playing with it!

Want to win?
As luck would have it, we just found out that Hasbro is celebrating World Play-Doh Day on September 16th by hosting a Facebook Parade featuring Play-Doh sculpts that exhibit national pride.    It is a day that celebrates Play-Doh (or as we call it “A staple in our house”) for captivating the imagination of millions of kids & artists!    To be entered to win, you just sculpt a favorite landmark, cultural icon, or patriotic symbol for the #WorldPlayDohDay Facebook celebration “parade.” 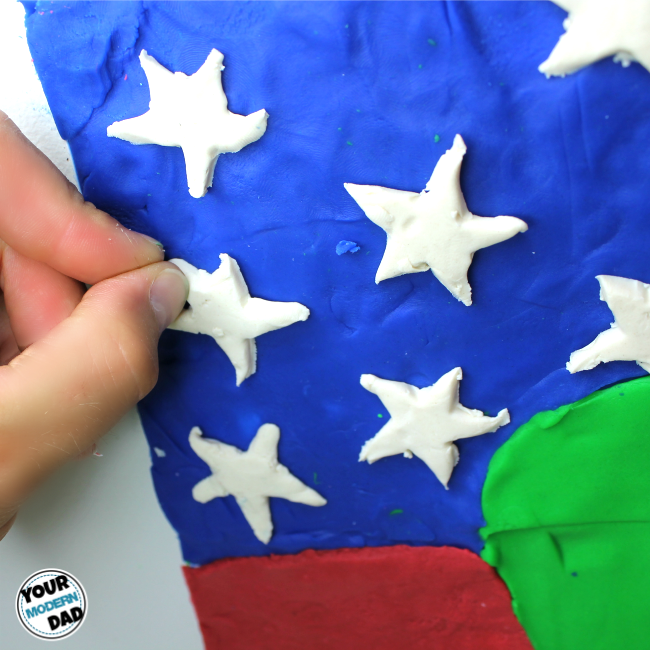 o   Select sculpts will be chosen as part of the #WorldPlayDohDay Parade that will be featured on the Play-Doh Facebook page on September 16th.